At my work... which is a church... we moved offices and are beginning some remodeling. Part of that remodeling is getting rid of the church library. The other day I came into my office to find the MOST amazing pamphlet(s) sitting on my desk. One is entitled "the Hippies", the other "Sex-ed: conditioning for immorality" Both were published by Publius and Associates about 1967 and 1969, respectively. (there isn't a date on them though, but their sources are all from about this time)
Needless to say they are so amazing that I have returned from a hiatus of not blogging to transfer these pamphlets' contents to the Internet. Over the next few entries you are going to get to read some amazing stuff.

Also, a few minutes after reading these I was told by our office manager that there were film strips and vinyls that accompanied the pamphlets, but that she had thrown them away. Needless to say I went and got them out. So, if anyone knows how to get their hands on a 35mm film projector I propose a movie night!

I don't have a scanner, so this picture is going to have to do. 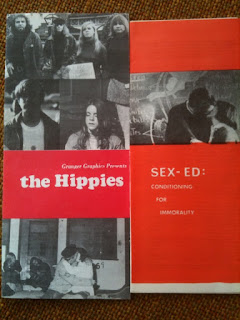 the Hippies
Since the dawn of history, man's goal has been to create a society free from drudgery, hunger, and disease - not only for himself, but as a legacy to pass on to his children. But only after the founding of our free society was the atmosphere created in which he could reach his goal. He worked and planned, built, and innovated... and grew!

Eventually, he was able to provide not only the necessities of life for himself and his children... but he could dream of acquiring some of the luxuries as well. Has man's dream of his children's future ended in a nightmare?

The end of World War II found America up from the depths of depression to the most affluent society known in history. Business was booming.

To capture these ready dollars, Madison Avenue turned to psychologists to analyze what motivated people to buy. Their studies revealed not only what motivated {sic} people - but techniques that could be used to create new desires in people... and to glorify the new and the different - whether it has quality or not!

It became apparent that, for the first time, American youth {sic} had plenty of money, also - and motivational research revealed that the influence of what has been called "Progressive Education" has produced a generation of youngsters many of whom were more concerned with being accepted by groups of their own age than they were with their own individualism.

Among this generation of susceptible youngsters, fads came - in epidemic proportions. The mass media helped to create fads - and profits poured in for those merchandisers who successfully capitalized on the fads.

Aw, c'mon Alicia, the title of your blog entry sounded very promising. I was hoping for more conservative angst from the heights of the 1960s cultural divide.

This is a bummer.

Hello there - do you still have these pamplets? I've been researching publius and associates and this blog post is one of my only leads.